Igny, September 26th 2019 – Drone attacks continue to strike all over the world. After the major incident at London Gatwick airport causing travel disruption for more than a day, the recent attack on two Saudi oil facilities caused significant damages and the biggest jump in oil prices ever. HGH focused its latest developments against drone attacks to offer the security’s industry the most advanced UAV surveillance solutions.

For a country that ranks third in terms of total defense spending, the world is trying to find out why Saudi Arabia was not able to defend their most critical facilities against drone attacks. Detecting drones or any unmanned aerial vehicles (UAV) as early as possible is a real challenge for many reasons. Drones are small and nonmetallic, which makes their detection and distinction from other flying objects such as birds very difficult, especially for surveillance radar systems. The two major difficulties reside in being able to keep a low level of false alarms while detecting the drone at the earliest possible stage, many kilometers away from the asset.

Awarded as the best anti-drone solution, the SPYNEL thermal camera coupled with its V-LRF option was designed to detect and track any kind of threat, making it impossible for a UAV to go unnoticed. With real-time full 360° panoramic thermal imaging, SPYNEL tracks an unlimited number of targets, coming from multiple directions, to ensure that no event is missed over a long-range. It acts like a radar with eyes, giving early warning for an unparalleled situational awareness.

The newly developed V-LRF option consists of a visible channel and a Laser Range Finder to provide the user with a comprehensive understanding of the situation regarding the detected UAV threats. While the thermal channel ensures night and day surveillance over a wide area, the visible channel enhances the identification of the threats, and the Laser Range Finder measures distance to the threat. Fully ONVIF compliant, the easy-to-use Cyclope software analyzes in real-time the full panorama and communicates alerts each time an event occurs. Ultimately, the latest features enhance drone detection confidence by providing classification, geolocation, altitude, distance and estimated speed of the drone target.

Since Unmanned Aerial Vehicles have the ability to be preprogrammed by operators to take flight near critical infrastructure, every nation needs to be prepared with a counter drone solution. Highly reliable and easy to deploy, Spynel IR cameras are a field proven-solution for detection, tracking and classification of multiple UAV simultaneously. It is the sensor of choice to be part of a complete counter-drone solution to protect critical infrastructures, airports, ports, off-shore platforms, electrical substations and many more. 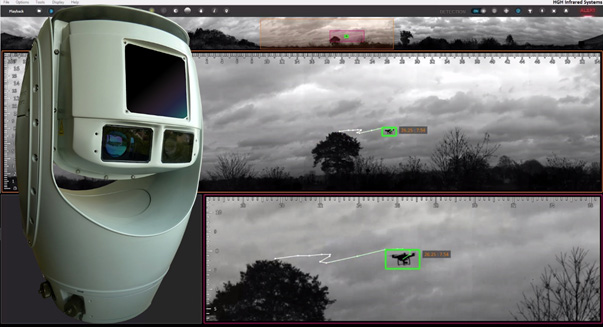 About HGH Infrared Systems:
HGH Infrared Systems has been an expert in infrared technology for over 30 years. Since 1982, HGH designs, develops, assembles and sells electro-optics systems and software for security, defense, oil & gas, energy and various industrial applications. The company has established itself as an international reference in terms of innovation in infrared technology, through the development of multiple advanced sensors, systems and proprietary software. HGH Infrared Systems’ Head Office is located in Igny near Paris, in the heart of the French Optics Valley, where the most well-known research laboratories and companies are based.