Eyes on the Horizon, with SPYNEL

Eyes on the Horizon

At a recent demonstration at Camp Roberts, HGH Infrared Systems’ Spynel sensor was evaluated for UAV detection using Class II and Class I UAVs that ranged in size from 2 up to 55 lbs. and varying payload capabilities. Several different scenarios were presented including payload drops. Throughout its testing, Spynel’s detection of small UAVs was found to be incredibly reliable, despite occasional erratic flight patterns and hovering. Spynels do not operate with a library “matching” mechanism, and therefore can detect even newly released UAVs or modified commercial models.

Unlike radars, they are completely passive and cannot be jammed or easily manipulated. Nevertheless, combining a radar specifically designed for UAV detection with a Spynel sensor can prove extremely effective as the two detection systems can complement each other. A layered and integrated system will provide the most effective capability, as demonstrated during the event. For the past two years, HGH Infrared Systems has successfully demonstrated their panoramic thermal sensor in a large number of evaluations and demonstrations, including Black Dart.

Along with the rise of these autonomous, unmanned aircrafts the need to be able to detect and track them to prevent any accidents also grows. Having an effective system in place which can provide an early warning has proven challenging as recent incidents have demonstrated the inability to detect and track the often cheap, slow moving, low profile targets with conventional sensors.

The idea for the design of HGH Infrared Systems’ Spynel series fifteen years ago emerged from the following observation: thermal monitoring solutions for long range panoramic imaging must be developed specifically for this need, and not use traditional subsystems. Thermal imaging allows for day and night surveillance, but also guarantees the ability to view any object, even deemed as stealth, whether it is hot or cold. Spynel will be especially successful in detection and tracking of asymmetric threats such as UAVs, UGVs and UMS. Spynel infrared imaging systems provide a full 360-degree image for wide area surveillance applications.

With built-in image analyzing software, Cyclope, all land, aerial and maritime targets are automatically detected and tracked, simultaneously, relieving the operator of scanning the image constantly himself and missing an event during lapses of attention. Spynel sensors were first commercialized in 2006 and have been deployed in the harshest environments since their inception to ensure unprecedented real-time security against conventional and asymmetric threats. 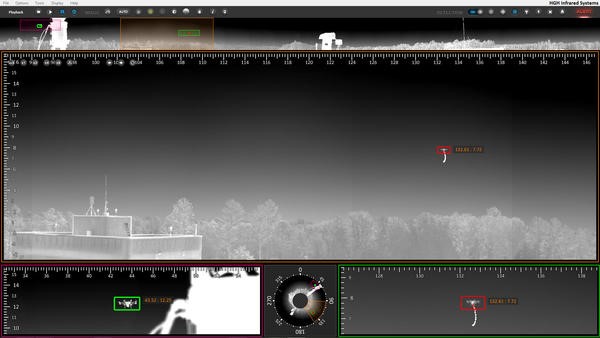