Article published in the march issue of Sea Technology Magazine (Authors: B. Applegate, B. Hill)

The Offshore Platform Security Threat Awareness and Response Program (OPSTAR 2013) was an integrated series of training, field experiments, and exercise events planned and conducted by the Naval Postgraduate School Center for Asymmetric Warfare. It was conducted to explore the unique issues within homeland security, homeland defense, emergency response and emergency management presented by safety and security threats to offshore oil and gas platforms. In addition, the program provided an operationally relevant venue for the research and field experimentation of developing and transitional technologies related to maritime domain awareness.

The training and exercise environments established during OPSTAR 2013 provided more than 350 personnel from 70 local, state and federal government agencies, as well as private sector organization participants, with unique opportunities to demonstrate and evaluate plans, systems, concepts of employment, and tactics, techniques and procedures. Through the use of various offshore platforms off the coast of Southern California, scalable observations, recommendations and best practices can be applied to other domestic and international platforms with a comprehensive government and industry effect.

The OPSTAR 2013 program was intended as the frst phase of a sustained program that combines regional “whole of government” emergency response and management capabilities with focused private sector preparedness efforts to address threats to offshore platforms and other critical infrastructure in the maritime domain. These events were enabled by actionable simulated intelligence and facilitated by the use of developing information gathering and fusion technologies. These technologies were used to collect information in real time, share it across a geographically dispersed response force, and leverage it to support effective and efficient decision making at the tactical and operational levels.

In addition to achieving these objectives, the OPSTAR 2013 program highlighted a number of major considerations that are significant to the ability of the public and private sector to prevent, prepare for, respond to and recover from a major safety or security incident aboard an offshore platform.

As demonstrated during the OPSTAR 2013 program, safety and security of offshore platforms is most effectively addressed through the application of a regional solution. No single agency or jurisdiction currently maintains the capability, capacity or resources necessary to prevent, prepare for, respond to and recover from an armed takeover of an offshore facility. Rather, collaboration with regional partners at the local, state and federal levels ensures that an effective and safe response capability is maintained.

Most current all‐hazard response plans are inadequate to address the safety and security threats to offshore platforms. While several strategic plans exist to identify frameworks and guidelines for command and control (e.g., Maritime Operational Threat Response, National Response Framework, National Incident Management System), they do not specifically operationalize response architecture, implement and sustain coordinated training programs, and integrate planning and resource coordination efforts.
Through the planning and conduct of a series of simultaneously complex and geographically distributed operations, the OPSTAR 2013 program highlighted the difficulty in maintaining “information dominance” in the maritime domain, both at a steady state and during an incident. In order to address this shortfall, a number of technology systems were demonstrated, collecting data through unmanned aircraft, unattended surveillance systems, and a wireless network architecture and fusion tool to leverage and disseminate the data to enable decision making and promote situational awareness. 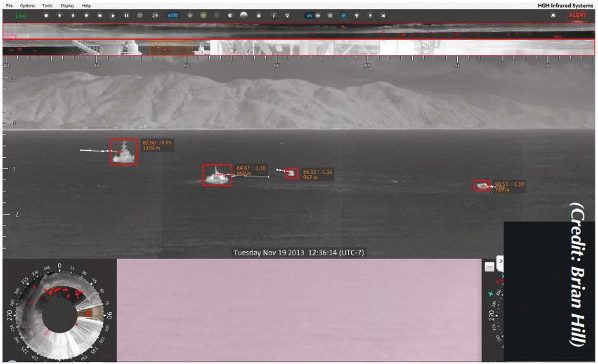 The capability to automatically detect and track surface and airborne threats has traditionally been performed with active RF systems, such as radar. Such systems are a mature and reliable way to perform automated maritime surveillance, and they serve in various capacities for coastal surveillance and situational awareness for maritime vessels. There do exist intrinsic characteristics of radar that make them less desirable when investigating surveillance technologies to base aboard offshore platforms, and due to these constraints the use of radar is a less than ideal solution, and largely not possible due to safety concerns. This necessitated researching alternate techniques and technologies to perform maritime surveillance.

Cameras provide a visual field of view that can be monitored from a central location, however they do not inherently detect and track targets. Though motion detection is possible with video processing, the presence of marine life and the motion of the waves of the ocean would create more false alarms than actual warnings.

Infrared (IR) systems have proven useful in a variety of surveillance implementations, however they have narrow fields of view, typically only covering up to 90° horizontally. This would require the use of multiple systems to cover the 360° field around an offshore platform and, without additional integration, would not operate as a single detection and tracking system but rather four disparate sensors. HGH Infrared Systems has a product offering, the Spynel series, that could potentially mitigate the above limitations, and could provide an inherently safe method of passive target detection and tracking. Similar to a traditional IR sensor but covering a 360° horizontal field of view by spinning like radar, it appeared to bridge the capability gap. The display offerings of the included Cyclope software even incorporated a planned position indicator, a typical display used in radar. It was for these reasons that the Spynel series was chosen for evaluation.

HGH offers a variety of medium‐ wave infrared (MWIR) and long‐wave infrared (LWIR) sensors, both uncooled and utilizing a Stirling cooler. Though LWIR tends to perform better in high‐ scattering environments like fog and rain, the MWIR Spynel‐S 6000 was chosen for this evaluation due to its publicized detection range being the farthest of the Spynel series, and having the most narrow vertical field of view, which would inherently reduce the number of unwanted aerial detections.

Installation and check‐out were first conducted at a land‐based test facility located at the Port of Hueneme, allowing easier access by HGH to conduct operator training before turning the system over to the Navy. It also allowed the Navy‐provided remote control and monitoring software and hardware to be tested prior to installation on the offshore platform, when easy access to the equipment would no longer be possible. Once relocated to the offshore oil platform, a Ubiquiti airFiber point‐to‐point data link to shore was established to enable remote monitoring and control of the equipment.

Cyclope, the software provided by HGH to setup and operate the Spynel‐ S, was installed on an off‐the‐shelf Windows platform. Initial setup and calibration were performed in about half an hour for each installation, including setting the height of the system above the water, setting the location via GPS coordinates and manually calibrating the horizon line.
The Spynel was evaluated on land for seven days and aboard the offshore oil platform for 14 days. The general evaluation methodology was to monitor Cyclope for Spynel tracks, at which point the target was verified visually with the PTZ camera and AIS data, when available. Cyclope offers the capability to ingest and overlay AIS data and to automatically pan a PTZ camera to the track, however, compatible hardware was unavailable to the Navy during this evaluation so these features were not evaluated.

Several test observations were made. The Spynel regularly and reliably tracked marine traffic of all speeds and sizes, from fast‐moving personal watercraft to large container ships moving at 7 knots. The calculated distance to the horizon, based on the installation height of the Spynel was 16 kilometers, making that the theoretical maximum tracking distance. During this evaluation container ships with significant height (27 meters above the water) were regularly tracked to distances of 20 to 26 kilometers, beyond the stated maximum range of the system, and sailboats were tracked up to 17 kilometers away. Small personal watercraft were tracked at high speeds. As they did not have AIS transponders, actual track distance could not be determined, however they were tracked between the oil platform and shore, which was approximately 6 kilometers away.

Though primary evaluation focused on marine traffic, during land‐based testing pedestrians and cyclists were observed on an adjacent walking path and pier 1.4 kilometers away. Although the update rate and therefore the positional accuracy of the ground-based radar (GBR) was greater, the GBR had difficulty tracking parallel to the metal chain‐link fence, a limitation not observed with the Spynel. The Spynel regularly tracked feral cats walking alongside the fence, which were completely untracked by the GBR. During the operational response exercise of OPSTAR, four MH‐60S Knighthawks were observed and tracked as soon as they came into the field of view, approximately 12 kilometers away.

During the evaluation, detections of marine life and glint were noted. These detections were reduced by algorithm development and configuration settings within Cyclope. Additional evaluation will be conducted in 2014, including automatic track reporting within RaptorX, a common operational picture. Also, tracking exercises against low-observable vessels, like panga boats, will be conducted to determine capability against these vessels commonly used by illegal smugglers. During testing, a live interdiction against a panga boat was tracked by Spynel, however it was within 800 meters of the oil platform so maximum track distance was not able to be ascertained. An after-action report is available for OPSTAR 2013, as is a full report on the Spynel‐S testing. Both are unclassified, for official use only.

Copies are available on request.