Article published in the August 2015 issue of Photonics Spectra.

The future promises better IR imager performance, thanks to technological advances. This is prompting a growing interest in IR imagers for use in UAVs and elsewhere.

For military and surveillance applications, IR imaging is all about SWaP: size, weight and power. There’s also another letter to consider: C, for cost.

Take, for example, an airborne drone. The smaller the SWaP, the smaller the drone can be, and the longer an aircraft can stay aloft. As for the cost, the lower it is, the easier it is to equip an unmanned aerial vehicle (UAV) with an IR imager.

Thanks to technological advances, the future promises better performance in terms of size, weight, power and cost, and that is making IR imagers of increasing interest in UAVs and elsewhere, said Yann de Charentenay, a senior analyst for MEMS and sensors at Lyon, France-based Yole Développement. He predicted the growth of the IR imager defense market will be about 7 percent a year for the next half decade, while the commercial surveillance market will expand at about 10 percent annually.

“All applications will grow for both markets thanks to smaller, more sensitive and cheaper uncooled infrared cameras,” de Charentenay said. At the same time, the cost of cameras will come down at roughly 10 percent a year. Thus, volumes will have to increase substantially, perhaps as much as 22 percent a year. These prospects are attracting new competitors, such as visible surveillance camera makers Panasonic, Mobotix and HIKvision, according to de Charentenay. He added that their entry means thermal imaging is no longer a surveillance niche market.

However, there are also technological drivers: smaller pixels, better uncooled detectors and wafer-level processing. Smaller pixels directly contribute to smaller imager size and weight, since pixel size determines detector size and that, in turn, sets the size of the optics and the rest of the system.

As for uncooled detectors, traditionally high-performance IR imaging required cooling the detector to a temperature well below zero. That upped the system’s size, weight and power requirements. Hence an uncooled detector is better, provided it delivers the required performance.

Wafer-level processing, the final big trend, involves optics and packaging of the detector chips while they are still part of an entire semiconductor wafer. This bulk processing reduces cost, which can be cut further with greater electronics integration.

“Lower-cost cameras increase the scope of applications and users, and thus increase volumes produced that reduce the cost. This is a virtuous cycle well-known in the semiconductor business,” de Charentenay said.

Examples of several of these technology trends can be seen at ULIS. The Veurey-Voroize, France-based company makes uncooled thermal sensors. As 7- to 13-µm IR radiation falls on the individual pixels, the electrical resistance changes, enabling thermal IR imaging.

Today, the state-of-the-art is a 17-µm pixel pitch with a pixel count of up to 1024 × 768, according to Christel-Loic Tisse, ULIS chief technology officer. Next-generation arrays will feature resolutions up to 1280 × 1024 and 12-µm pixels, which is close to the upper wavelengths of thermal IR.

“Down to about 10 µm, we can still focus the light without any major issues. We just need to make adjustments to manage the crosstalk that may occur between different pixels due to the diffraction limit. It certainly raises some challenges for the optical design company,” Tisse said.

As the impending switch from 17- to 12-µm pitch shows, some of the shrinkage due to a smaller pixel size will be swallowed up by an increase in pixel count, with this most likely to happen for demanding applications. For others, the drop in pixel size will mean the detector will be 50 percent smaller.

ULIS’s parent company, Sofradir SAS, is based in Palaiseau, France. Sofradir makes mercury cadmium telluride, indium antimonide, indium gallium arsenide and quantum well IR detectors, said Chief Technology Officer David Billon-Lanfrey. That array of materials allows its products to span the IR spectrum, from shortwave below 2 µm, through midwave at about 5 µm, to thermal near 10 µm. The company makes cooled detectors because these offer better performance. For instance, a handheld unit using an uncooled detector might be able to spot someone a kilometer away. A cooled detector, in contrast, could do so at up to three times that range, according to Billon-Lanfrey.

The company sees its IR imaging technology advancing along two different axes. The first is an increase in operating temperature; previously this was 77 K, the temperature of liquid nitrogen. That has since moved to 150 K and will go up to as much as 200 K within five years. The result is that the cooler will be smaller and less power hungry, helping lessen the size, weight and power needs of imagers 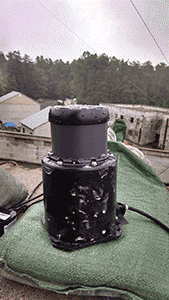 An uncooled IR imager provides a panoramic view of the surroundings. Photo courtesy of HGH Infrared.

The other trend is toward smaller pixels, with Sofradir being the first to develop 10-µm technology and bring products to market, according to Billon-Lanfrey. Next up will be detectors with pixel pitches perhaps half that, with the smaller size enabling an increase in resolution from 1280 × 720 to 1920 × 1080.

“The goal is to be able to have a full high-density [HD] detector that is the same size as the 10-µm small HD format, HD 720p,” Billon-Lanfrey said of the move to 5-µm pixels.

The company’s different detector technologies yield different IR-imaging capabilities. Thermal IR, for instance, enables objects hotter than the background to be spotted. However, midwave and thermal wavelengths don’t penetrate glass. In contrast, shortwave-infrared do, which means that imagers built with indium gallium arsenide can be used to peer through windows.

The switch to an uncooled IR detector can reduce size, weight and power significantly, said Vincent Leboucher, engineering manager at IR surveillance system manufacturer HGH Infrared Systems; the company’s North American headquarters is in Boston. HGH makes a line of cooled and uncooled panoramic IR cameras. One uncooled camera is three times smaller, weighs only 4 lbs and runs on only 5 W of power, according to Leboucher.

“The smaller size, weight and power consumption profile then allows for a highly adaptable and mobile surveillance application that can be carried in a backpack and then quickly deployed in a matter of minutes,” he said.

As for applications, a single panoramic camera can provide 360-degree surveillance without the need to deploy a complex array of sensors. Such surveillance is needed for power substations, data centers, nuclear facilities, airports and water treatment stations, as well as solar and wind farms. This is due, in part, to critical infrastructure facing some risk from the rising use of commercial drones.

Thus, IR sensors could see an expanding market and increasing demands to reduce size, weight, power and cost from drones in two ways. The first is to go on UAVs themselves. The second will be as part of the security system protecting sites from unwanted intrusions by the same aircraft. UAVs are indeed a hot topic for IR sensors, said Cees Draijer, senior program manager for defense, security and IR at Teledyne DALSA. The Waterloo, Ontario, Canada-based company is coming out with a new line of IR cameras early in 2016.

In doing this, the company is investing heavily in wafer-level packaging technology, he said. “It allows you to make a more compact and lower production-cost package, which gives you a cost advantage and a size advantage.” He added that the military today has more demand for smaller resolution devices, such as might be used for relatively close-in threat detection. However, this requires many more cameras, which implies they also must be less expensive.

Another trend is dual band systems, where information from the visible is combined with that from the IR. Because of the differences in resolution, optics and detectors, this merging of information has to be done in software and so it requires the right algorithms, according to Draijer. As for drones, onboard IR sensors could provide a different way to survey a scene. “IR is a very powerful detection tool. It allows you to see objects quicker,” he said.

Finally, there is also R&D underway in other parts of the sensor system. One research study appeared in Optics Letters in 2014, with Tatiana Grulois, an optical instrumentation grad student at ONERA, the French national aerospace research center in Palaiseau, France, as the lead author.

The researchers demonstrated a camera based on a thin silicon lens, with the prototype suitable for short range or indoor low-cost surveillance applications such as people counting. In addition to reducing size and weight, this approach cuts costs because it substitutes thin, inexpensive silicon for thicker, more costly germanium. The research has attracted commercial interest because lighter and less costly optical elements offer a way to further reduce size, weight, power and cost, benefiting both cooled and uncooled detectors. This would expand applications.